Many visitors of the Manga Comic Con 2018 poured their hearts out to us on social media. The reason: They felt they had been treated differently. Differently because they attended the Leipzig Book Fair in costume.

An open letter to Messe Leipzig.

This statement expresses a distance. It shows that someone is not one of them; that they are different.

Cosplayers heard exactly this sentence again and again on the weekend of the Leipzig Book Fair.

“people like us” were supposed to use another entrance, were laughed at and had to leave their suitcase in another dressing room. “When the lady at the dressing room told me that “people like us” had their own dressing room, I was completely surprised,” reports Stephanie, for example. At the entrance, many already felt treated differently because of their cosplay – unlike the other visitors who visited the Leipzig Book Fair without a costume.  Many were turned away at the entrances despite the onset of winter, including cosplayer Julia: “So we walked through snow, ice and wind to the rear entrance of the fair. But we weren’t allowed in there either – after all, “Entrance 5 would be for people like you.” The decisions of some employees seemed to be incomprehensible and led to the fact that one was not sure whether one was treated differently because of his costume. “It didn’t have to be cosplay. We were told the dressing room is full. Two minutes later, someone else is allowed to hand in his things. We wondered why,” Inken describes her observation.

Even exhibitors have had similar experiences: “When I wanted to enter the Book Fair, I was told that “people in cosplays and with colourful hair” should only use the entrance in Hall 1,” reports Jessica, who visited the Book Fair and the Manga Comic Con in Leipzig as an exhibitor. She had to go to her booth, her workplace.

The congress centre is a popular shooting location. However, many were treated less friendly there. After ten minutes, many were asked to leave. “We’ve done nothing but talk. When we asked, it was said that the CCL was only for congress participants. However, the definition of “congress participant” seemed to be “not dressed up,” Julia says. Some were not even let in and controlled, while persons without costumes were allowed to continue.

We heard these and many other similar stories from you this weekend. “I have the same ticket to the fair as all other visitors. I was expected to be walking through the snow, though.” Another visitor reported that she should get a marker for her identity card because she was dressed up.

We have also heard positive voices. Many reported good experiences and friendly behaviour on the part of security and employees. A cosplayer tells that a security staff member kindly pointed out to a photographer not to take photos of her without asking for permission. Others told us that the dealings were always friendly and professional. This is great and we are very happy about it.

Of course, respect should be mutual. Even cosplayers and photographers have not often enough covered themselves with fame. Loud music, garbage and blocked corridors are not good manners. Actually, we all want a peaceful coexistence, we want to celebrate the things that we love. Most Cosplayers also find it annoying when people set up their photo studios and turn the corridor into a flurry of flashbulbs without any chance of getting through. We should kindly point this out to them and set a good example.

Some problems or misunderstandings are certainly also based on incorrect communication or training of employees. However, these are things that can be solved quickly and easily. For example, it could be officially communicated on the trade fair channels that from 3 p.m. onwards the CCV will only be open to trade visitors – without making a distinction between cosplayers and people in civilian clothes.

The Book Fair is not a convention – correct!

Many cosplayers know this for certain. Transparent and clear rules on the part of LBM/MCC are important to ensure good relations. Seemingly indiscriminate decisions, which on the one hand are in stark contrast to the event’s own claim and on the other hand contradict themselves minutes later, are not only obstructive, but also incite anger and mistrust.

Dear Messe Leipzig, you invite us and even create an exhibition hall with dealers for us. You hang posters on which you show goodwill and demand respect: “A manga comic-con without cosplayers? Unthinkable.” Unfortunately, many of your visitors did not feel respected this weekend. “People like us” are “people like you”! Cosplayers are also interested in the Book Fair. They attend book readings and get in touch with publishers and authors on site. The ticket entitles you to visit the other event in both directions, so it should be a matter of course that everyone is treated equally!

Shiko Cosplay is the winner of public choice in Cohaku’s Christmas Cosplay Contest 2017!

When did you start cosplaying and what is your best memory so far?

I came into contact with cosplay in 2013 through some friends for the first time. They took me to a Japanese Cherry Blossom Festival and we wore homemade kimonos. Then I made many unforgettable memories. I will never forget our channel, the many conventions and all the people we’ve met. But one of the best memories I’ve collected over the years actually did not start so well. I posted a picture in a LoL Cosplay group. I received a lot of mean comments and people said I shouldn’t cosplay with my body type. The comments were nasty and made me really sad. But then many other cosplayers came forward and encouraged me. They spoke to me and helped me deal with the nasty comments. This has shown me that despite the whole Hate on the Internet everybody still sticks together – and I was really happy.

What is your most favorite Material/Fabric?

I do not prefer any certain material or fabric. I love to play with different materials and try out new things. I think that’s the great thing about cosplay. You can make something great out of everything.

Do you have a tipp how you can create something beautiful on a budget?

You can always negotiate prices of fabric scraps in fabric shops or markets. I often use curtains, tablecloths or bed linen. But before you buy something new, you should first search your own fund of materials if you have something suitable.
Cosplay groups can always be of great help. Many have leftovers, but no recovery for it. Therefore you can save a lot there.

Xawin and Butters are the Editor’s choice in Cohaku’s Christmas Cosplay Contest 2017!

When did you start cosplaying and what is your best memory so far?

Butters started in 2007, Xawin 2013. Our most precious memory is not only that we have met each other through this hobby but also winning the German Cosplay Championship in 2016. It was awesome with all the other contestants! We had (and still have) the opportunity to meet so many new and talented people thanks to Cosplay.

What is your most favorite Material/Fabric?

This isn’t an easy question – everything has pros and cons (and some fabrics develop a life on their own when you use them) . It depends on what you need or what you are sewing at the moment: Whether a princess dress or a rural peasant beauty.

Do you have a tipp how you can create something beautiful on a budget?

Ask your friends and family, what they already have and do not need anymore. If your friends and family know that you are always looking for fabric, they won’t throw it away so easily and can put them aside for you. You should take a look at fleamarkets and in odds and ends in fabric stores. You can always find something there.
And if everything else fails: You can create someting beautiful out of blankets from a discounter 😉
Header-Photo:
Models: Xawin und Butters von Nostrum Cosplay als Rotkäppchen und böser Wolf
Photographer: Mimi Costume-Artist
Category: Artikel

In order to participate you just have to send us your photo via Facebook or mail. This year we would love to see your cosplays about:

COSPLAY ON A BUDGET
Have you ever suprised yourself with a cosplay although you had a tight budget or recycled materials?

We will upload all participating photos on 16th december 2017 in a Facebook album. You can vote for your favorite photo from 16th December until 22nd December 2017.

Of course, there is also something to win!

Important!
By sending your photo you enter the competition. You confirm that we are allowed share the photo on our Social Media channels. (We’ll only share it in connection with this contest).
Please ask your photographer/model if it is ok that you post the photo on Facebook.
Only one entry is permitted per participant. Please read our terms and conditions.

Finally!
We are so so happy to announce that Cohaku Vol. 4 (English) is now available!
You can get your copy in our Shop.

A few months ago we asked you to participate in a poll to decide which articles you wanted us to translate from our previous German issues. Your opinion matters to us. Consequently you can find the most popular articles of our poll in this issue of Cohaku magazine.

Here’s the table of contents:

On the cover is awesome Liui as Spark (Pokémon Go).
The photo was taken by Joseph Conrad Impas.

Being a magazine from cosplayers for cosplayers your opinion matters a lot to us! The next English issue is already in the making but this time we want you to decide which articles you would like to read in the next issue. We have already settled for a variety of exciting and surprising tutorials and interviews, however, since the space in each issue is limited; we would like you to pick your favourites from these highlights!

Just take part in our poll and choose your two favourite articles from each category!

We hope you are as excited as we are for our next international Issue!

Here you’ll find a table of all articles that have been published in the English version of Cohaku magazine. You can sort the table by name, issue and category. By clicking on an issue number you can directly visit our shop!

Sorry, but you do not have permission to view this content.

Today we are happy to announce the next winner of Cohaku Christmas Cosplay Contest 2016!

Mokko in her cute Dreaming of Jeannie Cosplay is the editors choice! Take a look at her page: AkumaNoCha.
Photographer:  BlueBlack Diamond 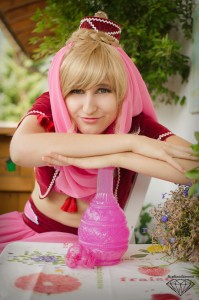 Our Cohaku Christmas Cosplay Contests 2016 is over!

We’re happy to announce the the Winner of public choice: